I hinted at some upcoming rhubarb-related goodness when I shared Saturday's strawberry pie and now I'm making good on my word. When I laid out my rhubarb, it didn't take long to decide what I wanted to make. Something I've never made before – a crisp! Sure, I've made pies. But a crisp is different, and I think it's so right for summer. Simple and messy and pretty in a rustic way that says I spent too much time outside today to worry about making dessert look perfect.

I hope no one objects to my posting two desserts in a row. And I wonder if there's some kind of rule against that. If there is, it probably involves my short shorts fitting a little snugger. Oh well. Rhubarb and strawberries aren't around all year, ya know. And one mustn't squander what nature hath provided.

Much like the strawberry pie, this recipe takes a simple approach to one of summer's most delicious perks. My grandma has a reliable source where she can get wild rhubarb for free and obviously, we get to enjoy some of it, too!

Since I'd never even tasted rhubarb before, I was skeptical about how this recipe would turn out. Silly me. Rhubarb's tough, bitter taste cooks down to a soft, sweet, and slightly tart filling. With the almost-caramelized, crispy and chewy topping, the dessert goes from sweet to tangy to sugary to gooey to crunchy and all the way back again.

Unless you've been living under a rock [or don't ever get on Pinterest], you probably know that it's strawberry and rhubarb season. Farmer's Markets are brimming with the first picks, fresh from small farms and gardens. With that in mind, I think it's time for me to get on my soap box.

A couple of weekends ago, on May 24th, we attended the March Against Monsanto in Indianapolis. Surprisingly, this was my first time participating in a protest or rally of any sort. It. Was. Awesome. Being that it was my virgin protest, I forgot all about making fancy signs until we were on our way out of town. So arts and crafts time happened on the car ride to Indy and it resulted in some pretty impressive signage, which you can see on Instagram if you're interested!

As we enter this season – the time of year when fresh food is the most abundant – I urge everyone to get involved, learn more, and make an effort to avoid GMOs at every possible opportunity.

Buy local whenever possible, and don't hesitate to ask the vendor about how their food is grown. With whatever space you have, try to grow a few types of vegetables and herbs at home. When grocery shopping, seek out organic produce and non-GMO brands.

Every cent that you don't spend on bioengineered food is a victory for real food.

And I, for one, happen to love the way real food looks, smells, tastes, and makes me feel. How about you? 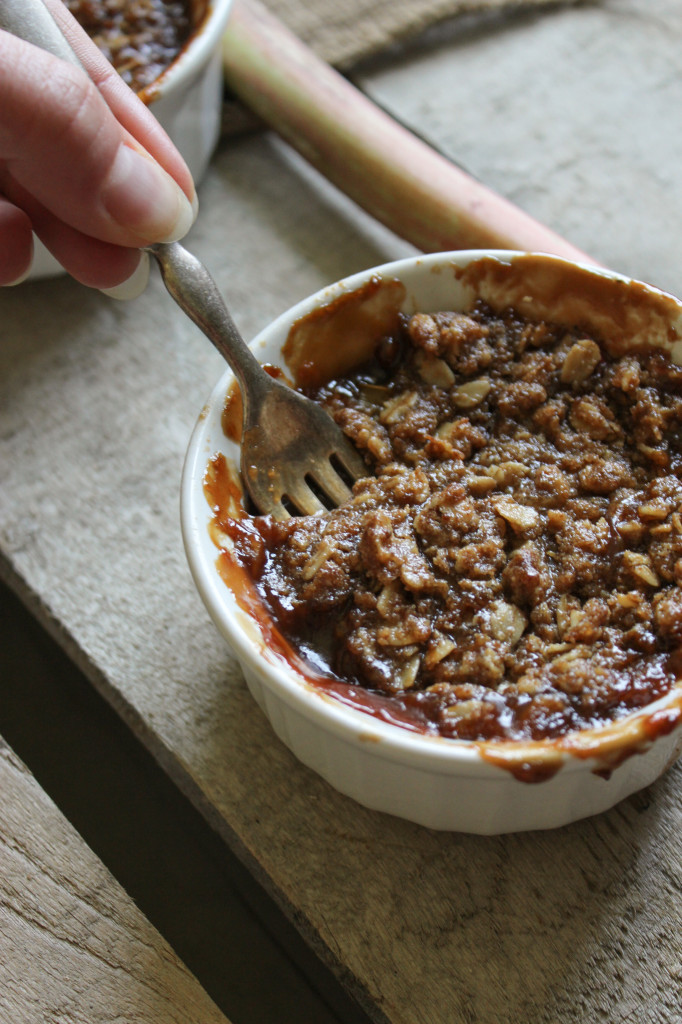 This simple seasonal dessert is made with sweet and tart rhubarb and topped with a crispy layer of caramelized oats.