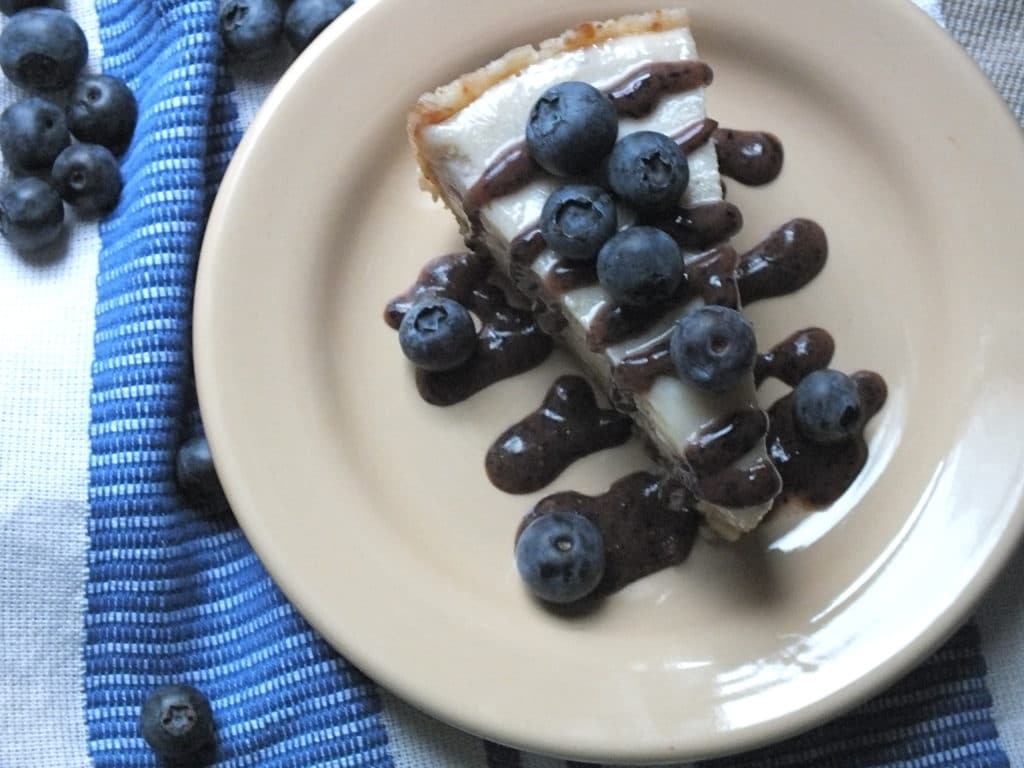 It’s confession time. This may seem like complete blasphemy, but we’ve never had a piece of real New York cheesecake. It’s one of those things we just haven’t gotten around to. Because of that, we’re probably not qualified to make comparisons between New York cheesecake and our cheesecake. But we’re going to anyway.

This cheesecake is creamy, rich, and decadent, yet light and summery thanks to the fresh, tart lemon. It tastes just as delicious as regular cheesecake and it’s better because it’s not loaded with all of the bad stuff. That’s not to say this dessert is light on the calories by any means. The difference is that most of the calories come from nuts and dates instead of butter, flour, sugar, cream cheese, etc. That’s a pretty fair trade.

Start off by making the crust. In a food processor, combine macadamia nuts, dates, and salt until a thick, crumbly dough forms. 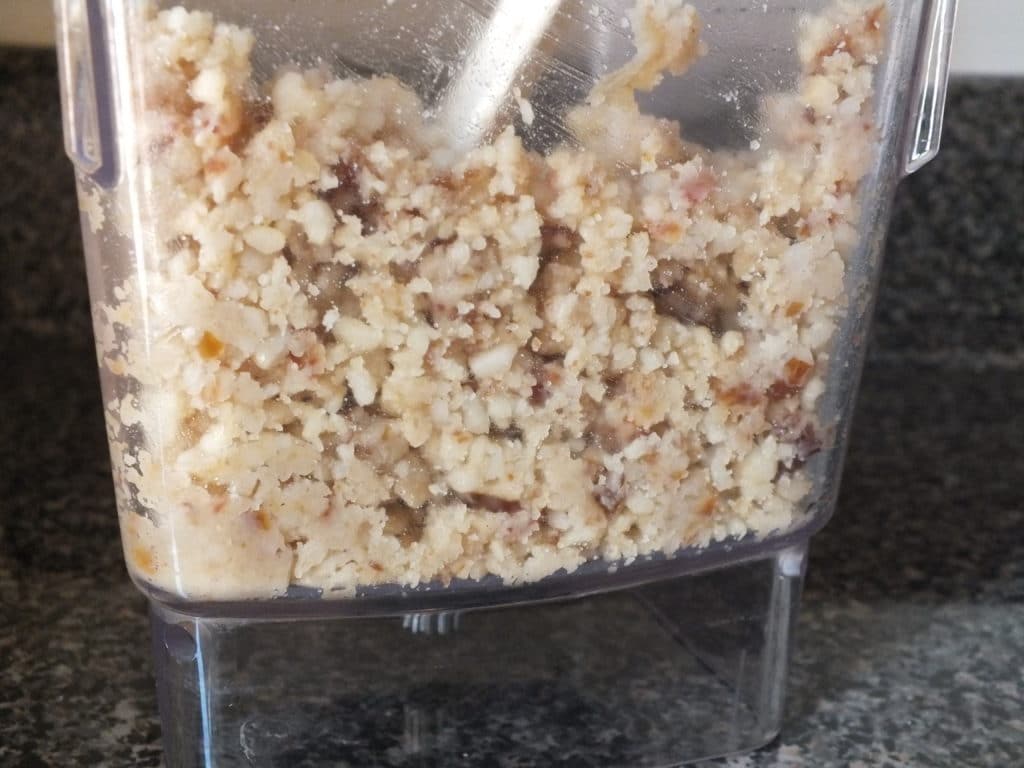 Sprinkle a thin layer of dried coconut into the bottom of your pan. Then add the crust mixture and use your hands to press it out. Note: We didn’t have a springform, so we used a 7″ saucepan instead. Hey – ya gotta do what ya gotta do. 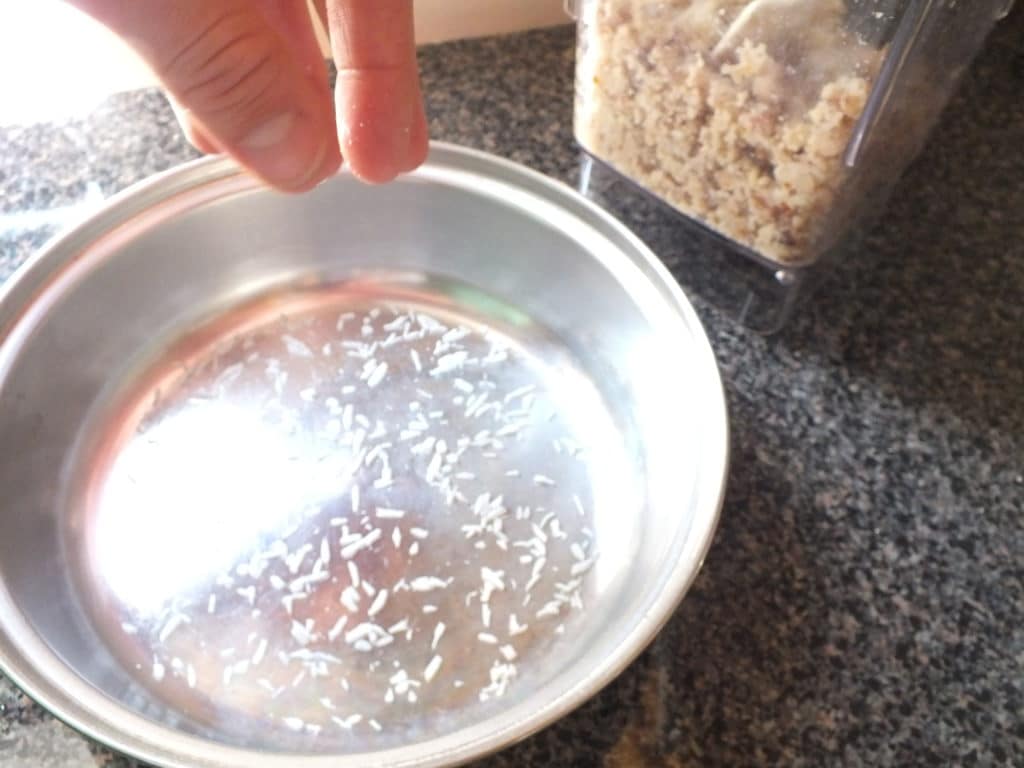 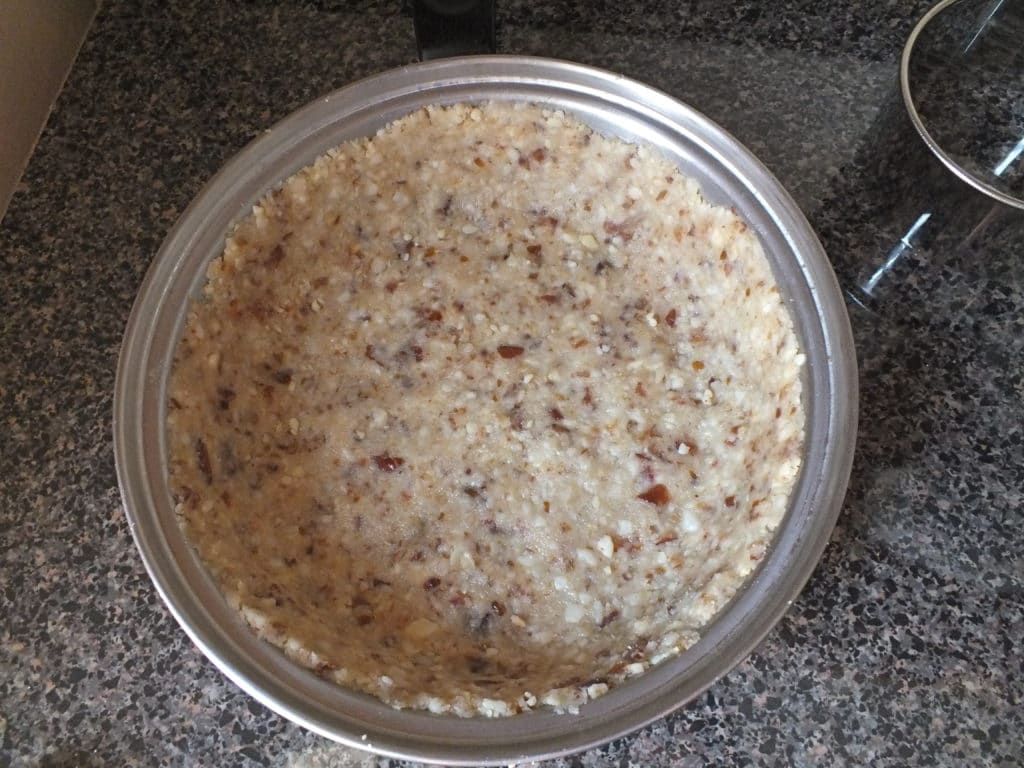 Add all filling ingredients into Blendtec or high-speed blender. Blend until smooth and creamy. Pour half of the filling and add a thin layer of strawberries [optional]. 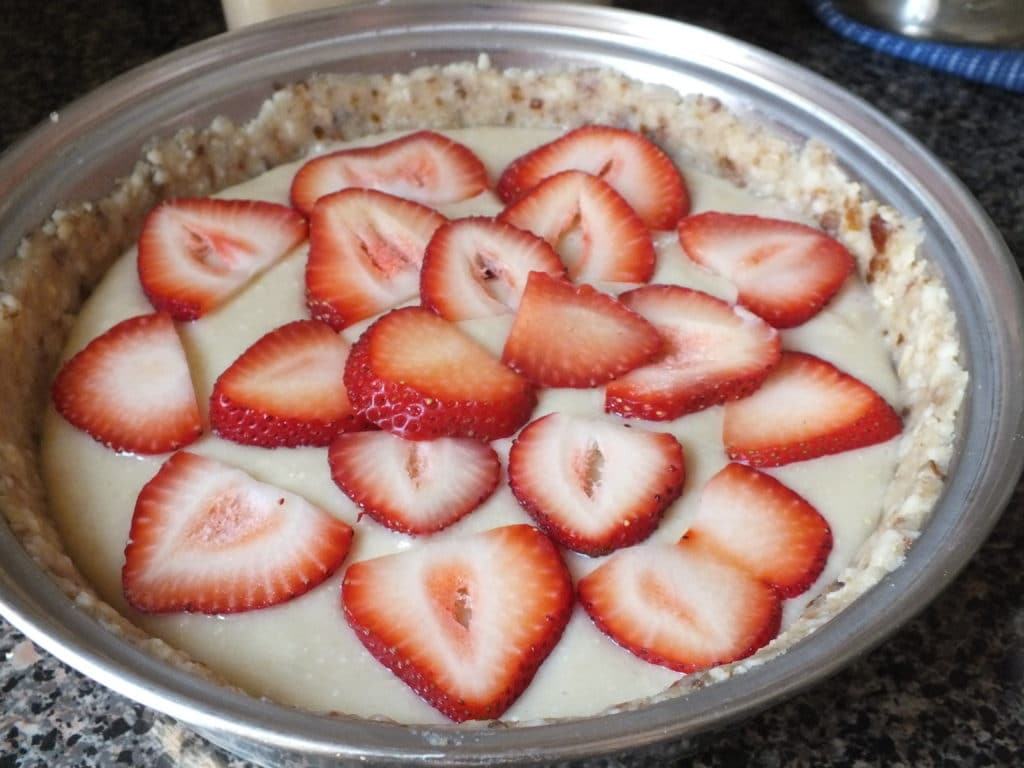 Then empty the remaining liquid into the pan. 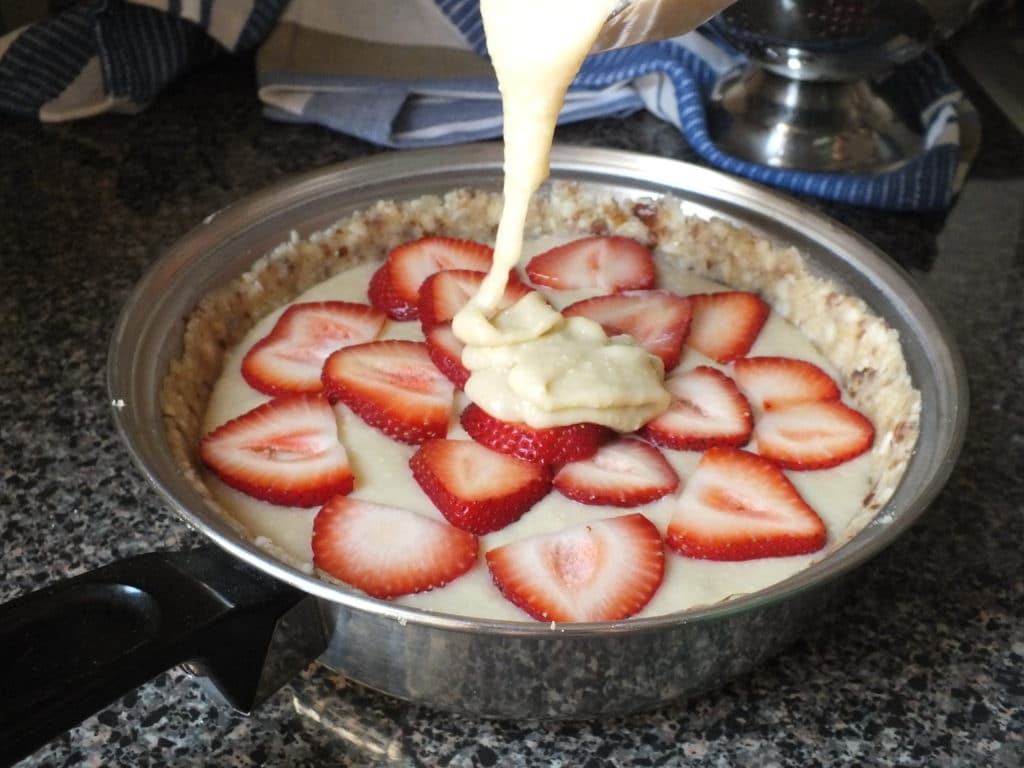 Place the cheesecake into the freezer for at least 3 hours.

Meanwhile, add blueberries and dates for berry topping into a blender and blend until smooth.

When the cheesecake is solid, remove it and cut it to your liking. We ended up with 12 – 2″ wide pieces.

Serve it up all fancy-like with drizzled topping and fresh blueberries. It’s rich and satisfying, so you’ll definitely be able to save some for later. Store in the refrigerator so there’s no thaw time when you’re ready for your next piece. 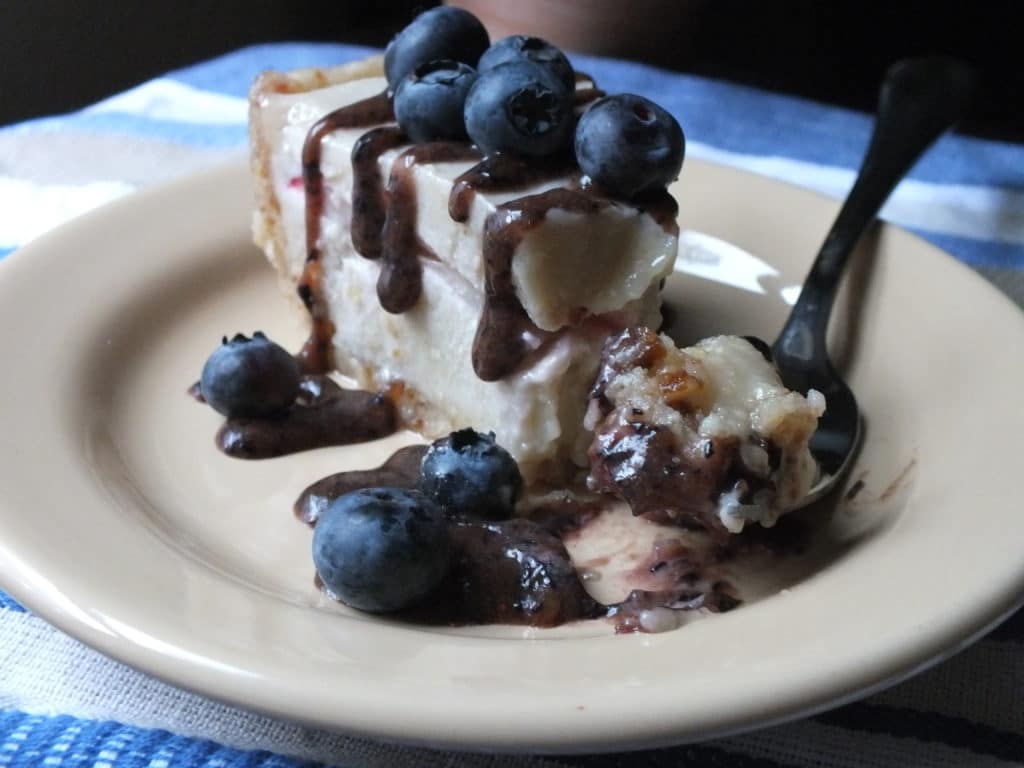 Blueberries were all we had left… 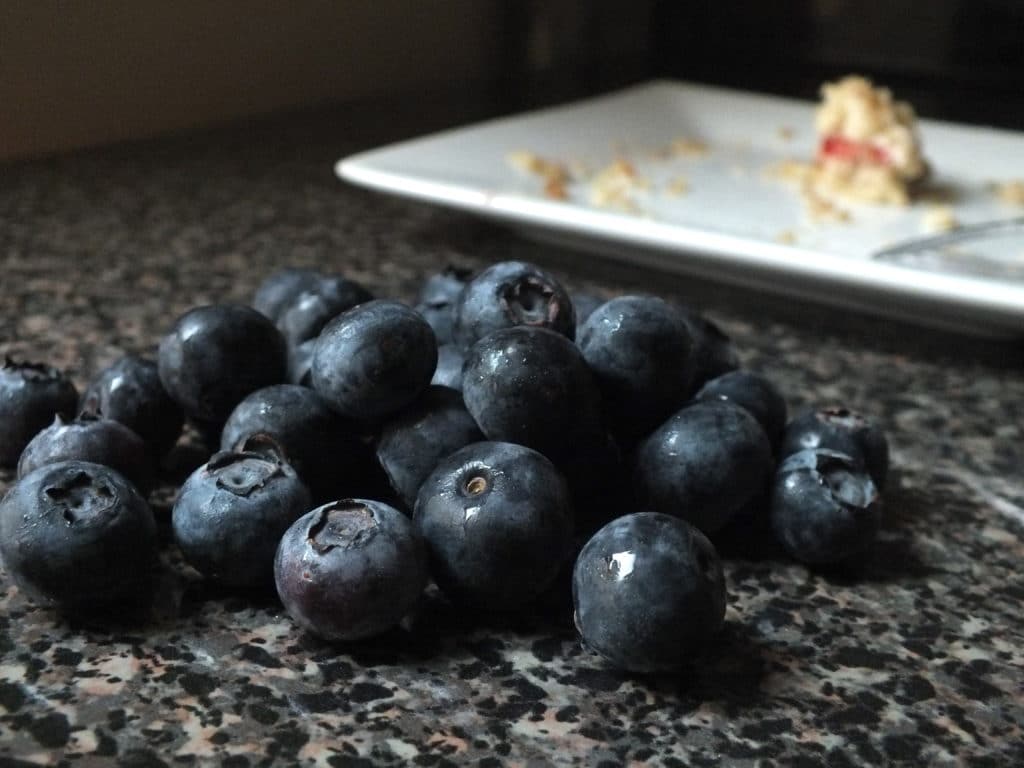