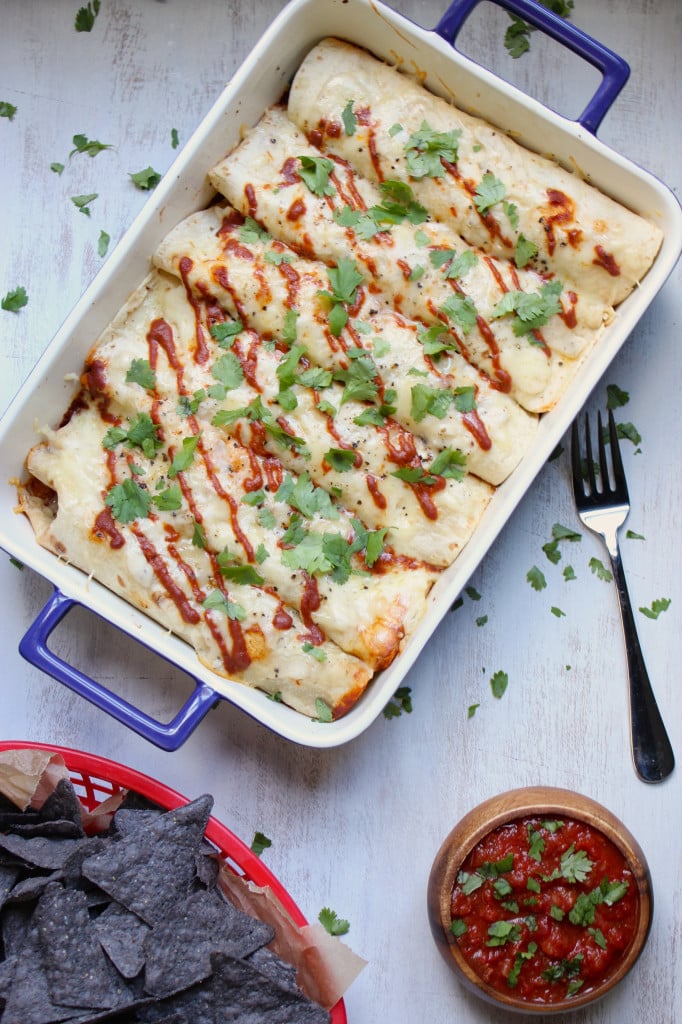 Someone in this household has not been feeling well. I’ll give you some hints – it’s someone who really likes Mexican food. And doesn’t like to be taken care of or laying around in bed. And would much rather be cooking, or playing in the snow, or having teeth pulled than being sick. You guessed it… it’s me. Amidst the stuffed-up haze of tea, hot lemon water, sneezing, and herbal remedies, these enchiladas were all I could think about. 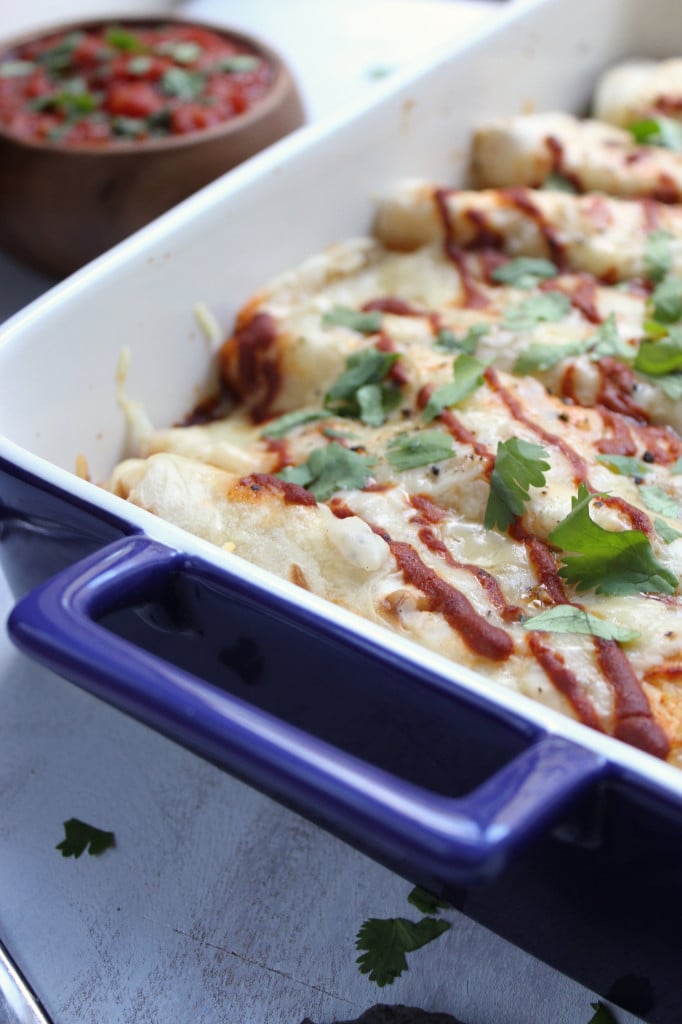 These glorious enchiladas happened a while back – before I came down with the black plague – and now that I’m starting to recover and regain my appetite, they’re calling my name again. Mexican food is one of my favorite cuisines, but it has become more or less a delicacy in my book.

That’s because bad Mexican food is right up there with bad sushi. And mediocre Mexican food is just a letdown. In Indiana, you get the choice between the two grimy options in town or Don Pablos in Indianapolis. That’s about it. I haven’t had much luck in New York, either. To be fair, I only tried two places, but neither one of them blew me away. Simply put, Mexican food doesn’t happen unless it’s homemade.

When I had a strong craving for some good Mexican, the forecast was literally predicting “ice balls.” Rather than trying to find a place nearby and winding up disappointed [I’m such an optimist, I know.], I looked over at Clark and said, “Let’s make some freakin’ enchiladas. Like, mind-blowing enchiladas.” And so, make them we did. They were pretty dynamite on the first try, but few tweaks perfected the recipe and made them totally share-worthy. 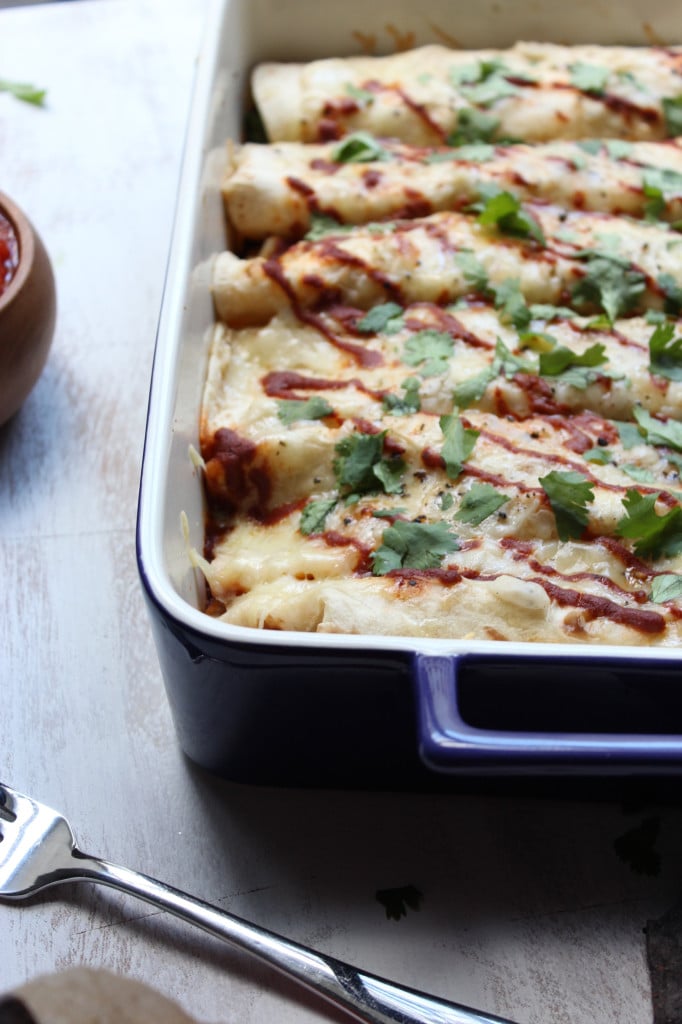 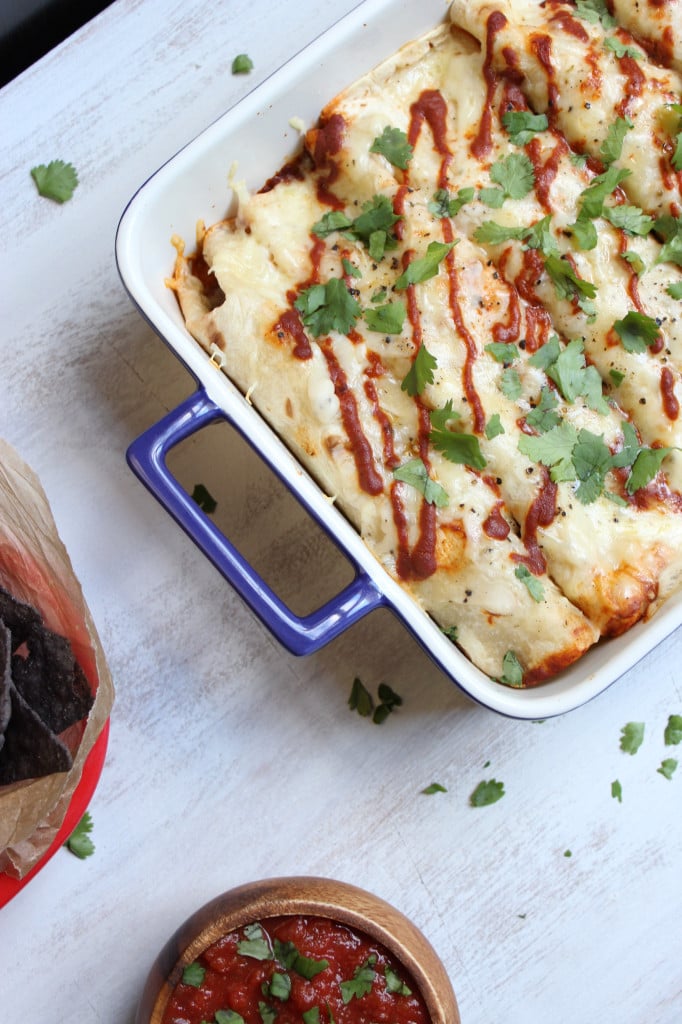 Colorful, fresh, and full of warm flavors, these enchiladas are everything that I expect from Mexican cuisine. They prove, once again, that homemade food really is better. And cheaper. And healthier. The whole dish cost less than $15 to make and it serves at least 3 people. All in all, each enchilada has about 150 calories total. [A typical restaurant’s enchilada dish weighs in at 600-1500 calories per serving.]

Although homemade tortillas are definitely better, the spelt ones from Rudi’s that we used weren’t bad at all. They’re nice and soft, with a good sweet flavor. Which makes them the ideal vehicle for the creamy cauliflower sauce, seasoned chicken, roasted peppers, and kale. In hindsight, I have a feeling that these would have been even better with a big scoop of guacamole on top. 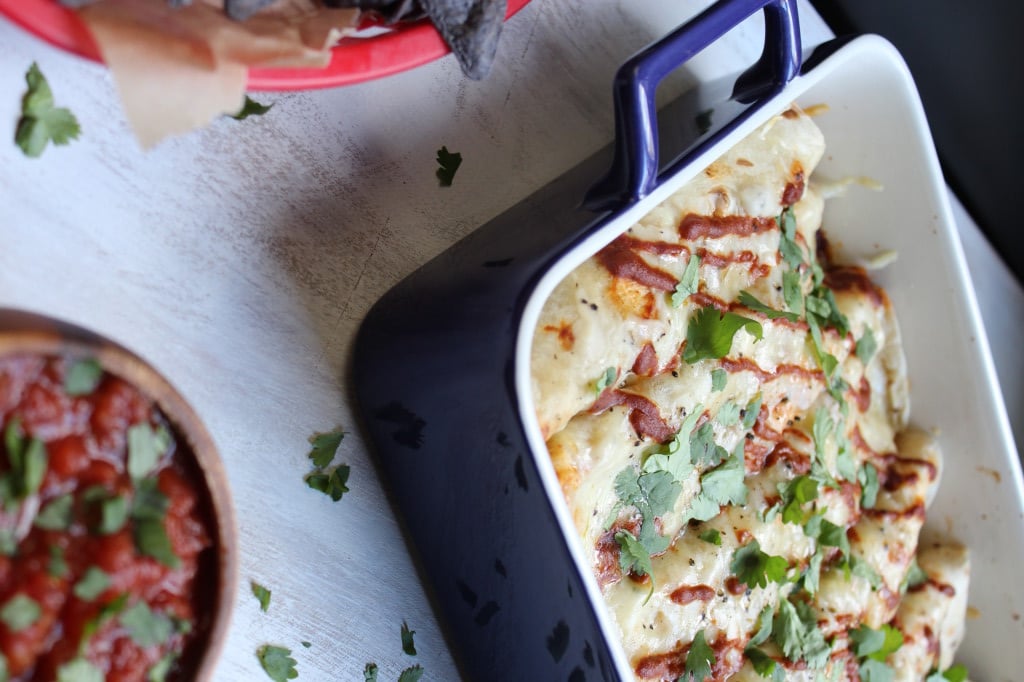 After the enchiladas were gone, Clark used what was left of the kale to make me a huge plate of sautéed greens, onions, and garlic. He sure does know the way to this girl’s heart. I devoured every last bite and I swear I felt a little better right away. Not 100%, but definitely better.

There was one positive to me being sick. During all of that downtime, we finally got to start laying out our latest project: The Burger Book. If you’ve been following along, you’ve already seen the sneak peek. I might’ve leaked another preview on Instagram, too. ;) We’ve spent the last few months brainstorming, testing, and perfecting 20 veggie burger recipes to combine in our first ecookbook. It will be available by the end of January and we couldn’t be more excited to share it with you all!

We took what was left of the enchiladas over to friends. And just like the pot pie that we shared a while back, these were gone before we left. Now I’m kind of regretting giving them away. What I wouldn’t do to eat one right now. But in the meantime, I’ll just keep sipping this ThroatComfort Yogi Tea. 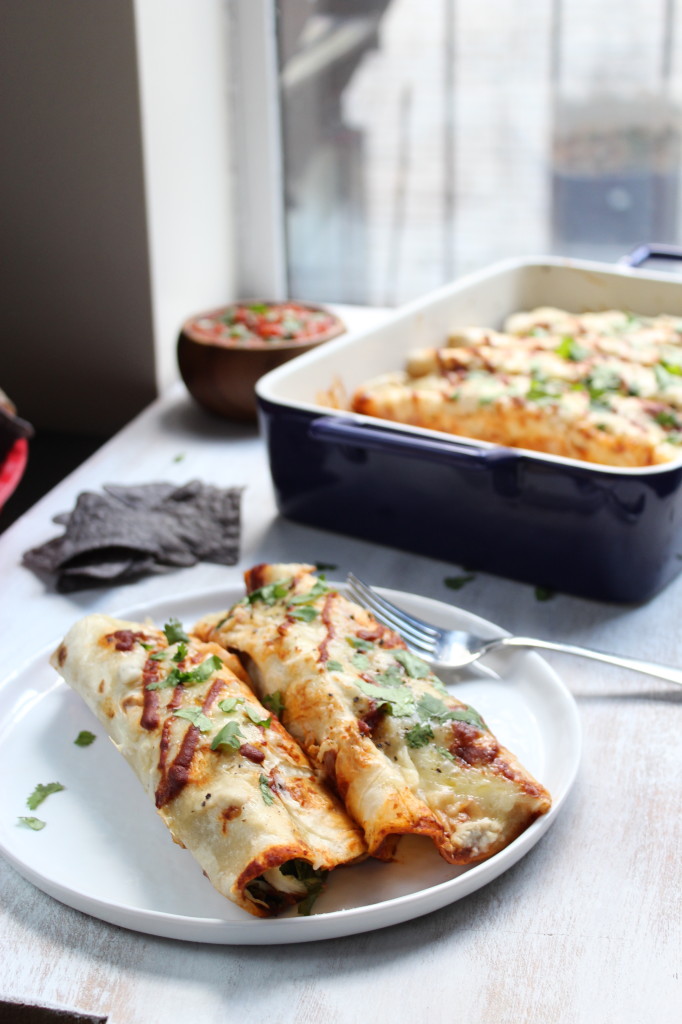 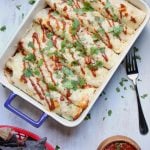 Flavorful and fresh enchiladas, packed with plenty of veggies and spiced chicken. These are a healthy, low-calorie take on a classic Mexican dish.