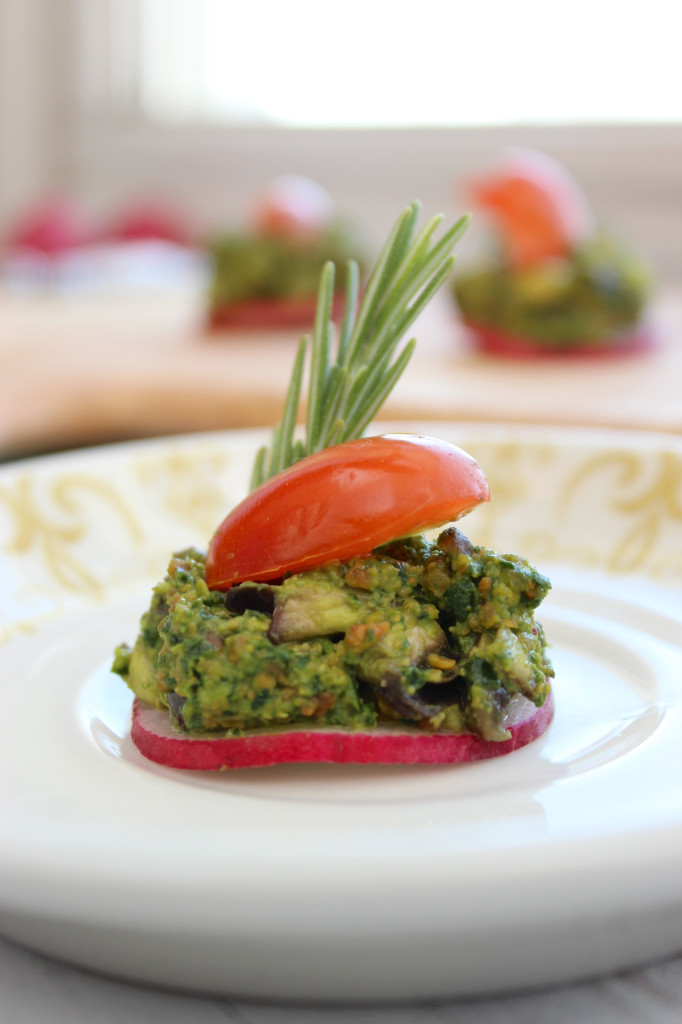 If memory serves me correctly, I just mentioned something about dealing with unexpected things the other day. At the time, I was talking about sweet potatoes, air travel, and car trouble. This time, it's the entire recipe that was unexpected.

At least something good came out of it in the form of these flavorful, bite-sized appetizers. Pistachios make for a creamy and salty pesto, and there are savory bits of portobello mixed in. Miniature radish discs are the crunchy vehicles that get the job done. It's an irresistible hors d' oeuvre without an ounce of guilt.

Moving away from Brooklyn has been, and still is, a helluvan adjustment in so many ways. We were there for a year, and that gave us plenty of time to get used to certain things; some of the things sucked and some of the things were awesome. I could draft a list of the differences between here and there, but at the risk of sounding whiny, I won't. Instead, I'll just focus on one main point that has been on my nerves lately: the lack of food.

We were spoiled by the availability and variety of food in New York. I could walk to Whole Foods on my way home from work and Clark could walk over to Trader Joe's after hitting the gym. That's not to mention the countless farmer's markets, smaller groceries, and health food stores.

In Shelbyville, we have a Kroger about 5 minutes away from where we live, with a meager selection of produce. Same story with Wal-Mart. There is a Whole Foods and a Trader Joe's 45 minutes away, both of which are hit-or-miss. As for restaurants, we have plenty of chain options, a couple of mom-and-pop places, and the latest addition, a higher-end restaurant with a real chef and a small, seasonally focused menu – there's hope!

At least once a week, we make the drive to the north side of Indianapolis, spending time and gas money, to seek out organic, healthy food options. We had two recipes planned for next week. One of which involved cauliflower and one of which required bok choy, two ingredients which in my opinion, should be standard fare at most any grocery store, market, etc. No luck at Kroger, no luck at Trader Joe's, no luck at Whole Foods. On top of that, there were no organic apples, lemons, or blueberries – other items that were on our list.

To be fair, they had non-organic cauliflower and apples at all three of the stores that we visited. But I shouldn't have to settle for produce that is planted in pesticide-infested soil and sprayed with chemicals throughout every phase of its life cycle. That is another story, for another day. One rant at a time.

Why can't we have good, quality food here? I would love to get to the bottom of it. Indiana, and the Midwest in general, is known for its abundantly fertile soil, although most of it has been depleted and ruined by unethical farming and corporate interests.

Before wholesome produce could ever start to invade our processed and boxed food-laden shelves, there would have to be a demand. And why would people demand healthy foods when they can choose something easier – from McDonalds, from White Castle, from the local Mexican restaurant, or from the vending machine at work?

The inadequate access to real food perpetuates a never-ending cycle of decay. Since moving here, Clark and I have both noticed that people spend A LOT of time talking about their health, or rather, their lack of health. There is a reason that Indiana is ranked 8th in the nation for obesity – our generation and the one before it have grown up on Pop-Tarts, Mountain Dew, and Chicken McNuggets. That catches up with us in ways like chronic headaches, depression, diabetes, heart disease, back pain, birth defects, and overall lethargy. No one feels like doing anything because they don't feel good, and they don't feel good because they don't feel like doing anything. Not grocery shopping, not cooking, not exercising, not going to the park, not going for a walk, not living – just sitting around and wondering when they're going to die. And so it goes.

It makes me sad to watch it happen, and maybe even a little mad. So many people are miserable as a result of our food situation and it's hard to know where to lay the blame. Sure, it is largely the fault of big agriculture and government policies, but the information is there for people to find, if they would just wake up.

Most people use the phrase, "I don't have time to: shop, cook, eat healthy, exercise." That's a nice way of saying, "I don't feel like putting forth the effort to improve my health." I don't have much free time either. But I make it a point to find the time to drive an hour to the nearest Whole Foods. Because really, as cliché as it may sound, time is all we have. I don't want to spend mine feeling like crap.

This isn't the first time that I've expressed my feelings on the topic, and I'm sure it won't be the last. It's a learning process – learning how to work with what we have and making something amazing out of it. This recipe is an example of that. With both of our planned recipes out the window, I opened the fridge and checked out the situation. We had radishes that were close to going bad and a couple of big portobello mushrooms that we found on sale at Kroger [score!]

For whatever reason, pesto came to mind. Everybody really seemed to like the adorable Zucchini Pesto Roll-ups, so I thought I should give the people what they want – MORE PESTO! Pistachio pesto, to be exact. A few minutes later, these bite-sized morsels were whipped up and ready to enjoy. I hope you don't mind a side of rant with your canapés.  Bon appétit!