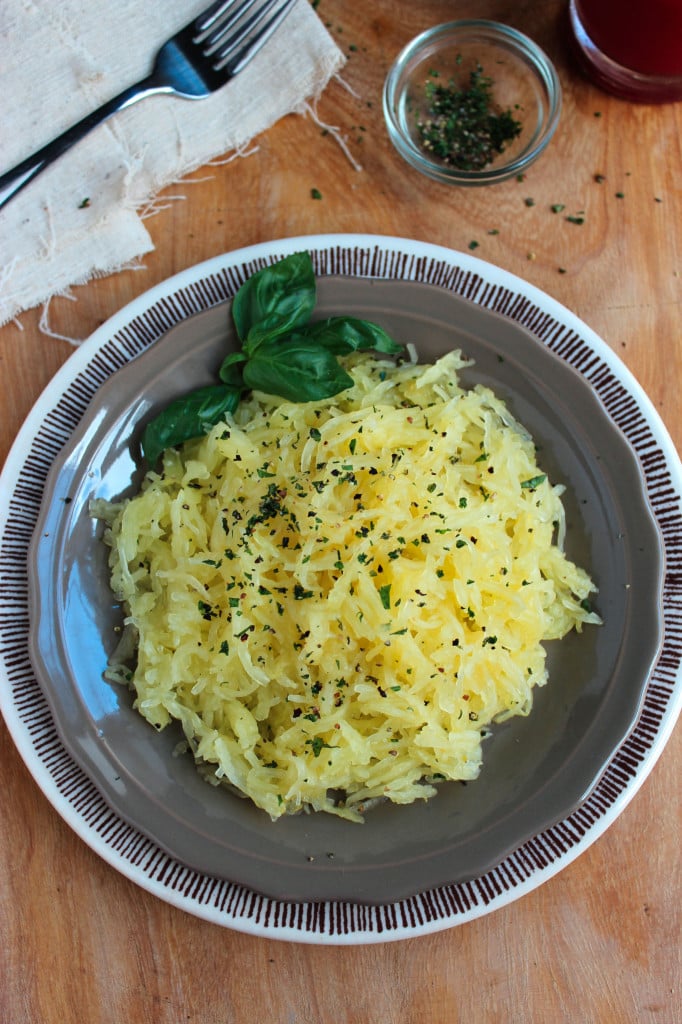 The first time we tried to make spaghetti squash, it didn’t go so well. In total newb fashion, we cooked the entire squash for an hour and fork-tested it for doneness. Have you ever tried to cut a freshly baked squash in half? If you haven’t, let us save you the trouble: it is not fun and not necessary. Fast forward to last weekend: we snagged a choice specimen on Friday afternoon and it was the first thing on Saturday’s agenda. We cut the squash in half before we baked it, which worked out much, much better.

We had every intention of dressing this dish up with a delicious sauce. I suggested pesto because I love it so much, but Clark suggested that we keep it simple to allow the flavor of the squash to come through. That Clark, he's one smart cookie. So we were planning on tossing it in a light coating of olive oil and herbs...

But when it came out of the oven and we tasted it, the plans changed. No sauce necessary. The flavor of this squash is so unbelievably delicious on its own. I would describe it as buttery and slightly sweet; much more flavorful than regular noodles. It is perfectly complemented by a hint of sea salt and black pepper and a dusting of basil, rosemary, or thyme.

Cooking it whole wasn't the only mistake that we made the first time we attempted spaghetti squash. After eventually getting the damn thing open and melting a few fingerprints in the process, we scooped out the center and started trying to fork away at the sides to get the "pasta." That didn't work so well. It just started coming apart in chunks instead of the ideal strands. By that point, we were already burnt-fingered and frustrated so we just gave up. If we had just popped it back into the oven to bake a little longer, it would have come out just fine.

I'm currently enjoying a bowl of hot spaghetti squash pasta and patting us on the back for trying it again after last year's complete failure. Now that we know how to cook it and how delicious it is, it has secured a spot in my list of favorite fall foods which, as of now, includes brussels sprouts, okra, apples, and spaghetti squash.

For the record, we tried a small bowl with marinara pasta sauce and one with olive oil just to make sure we weren't missing out on anything. The plain jane version still wins.

Note: At the center is a pocket of seeds and looser flesh, similar to the inside of a pumpkin. That's not what you want to eat. When you cut the squash in half before baking, use a spoon to hollow out this area. If you're feeling ambitious, save the seeds and roast them later. They make a tasty and super nutritious snack.

Hands down – this is the easiest way to enjoy one of fall's best squashes. Swap regular pasta out for this healthier version!