The main reason for our trip to Nashville was food. But let’s be honest – food is the driving force behind most of our trips. In Cancun, it was the tacos. In Nashville, it was everything.

Everybody knows Nashville is a music city. You can’t walk down the street without hearing live music floating out from the bars, restaurants, and boutiques. What you may not know is that Nashville is a also foodie’s dream. From southern staples to New York-style pizza to tacos and everything in between – this city has something for everyone. When you visit, do so with wide eyes and an empty stomach. Eat as much as you can and then keep eating.

My only request is that you promise me, before you read this post, you will promise not to judge me for how much I ate. K? K. 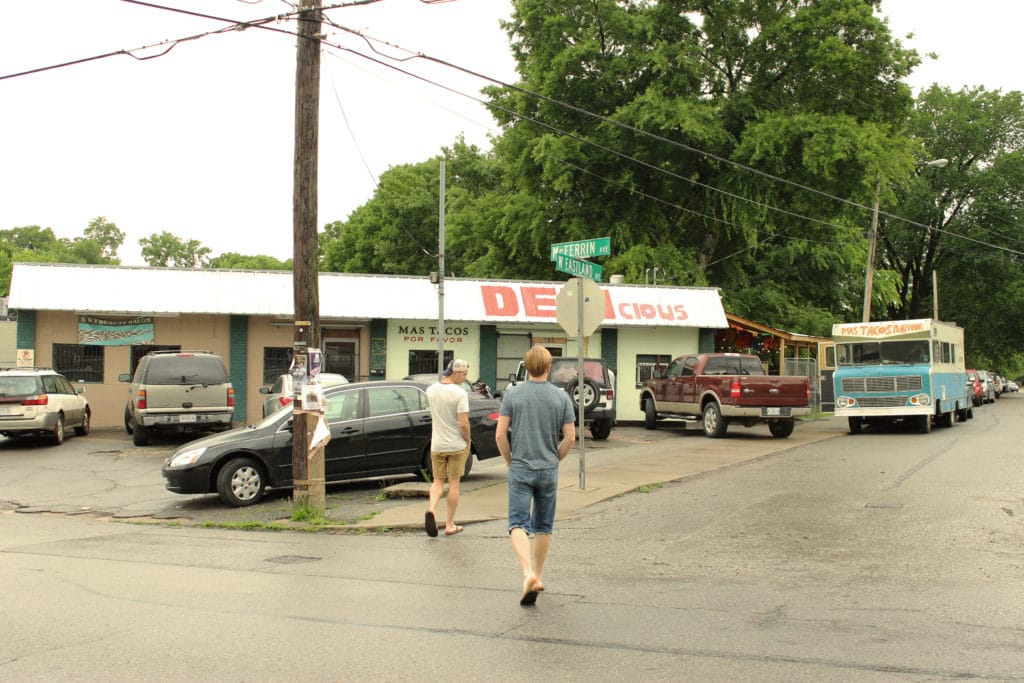 Our first stop in Nashville did not disappoint. The roughly decorated and dimly lit taco stand is famous for what they do. They started the business slinging tacos out of a retro food truck: see above. But when the demand overwhelmed their capabilities, they set up shop in East Nashville. Even now, if you go at lunch or dinner, you can still expect to wait in line for a few minutes. Absolutely worth every minute.

They have a small menu of a few taco selections that occasionally change. At $3 a piece, get one or two of each. The posole verde (soup) is fantastic, as are the plantains. They do authentic Mexican food really, really well. I should have gotten the elote… but alas, I guess I’ll have to make another trip.

Pro tip: Mas Tacos is BYOB (!!!!!!) which means you can seriously, bring your own booze. You don’t have to sneak it in or be covert about it – it’s allowed. BYOB places are like a needle in a haystack these days. 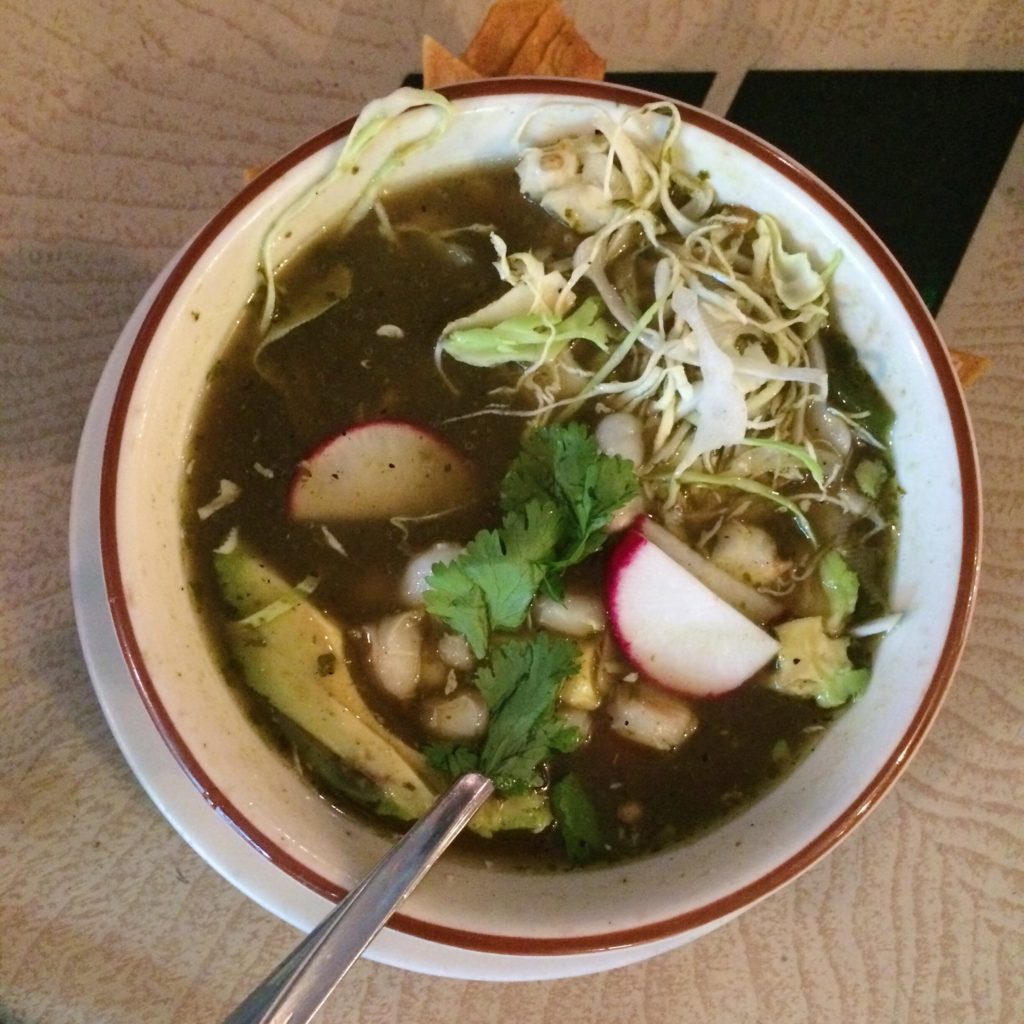 Conveniently located next door to our hotel, Biscuit Love also started out as a food truck. They recently opened up a brick and mortar in the Gulch area of Nashville. If you go for brunch, expect to wait in line. It’s worth it, but just be prepared to wait 20 or 30 minutes to order. I’d say that’s become pretty standard with any brunch spot these days.

They do about 15 variations on biscuits, including sweet and savory options. All of the biscuits are made from scratch – we saw them making the dough when we walked past one night – and it tastes like a secret, ancient family recipe.

I went for simple and straightforward with fried eggs over top. Plenty of biscuit for buttering or for soaking up yolk.

Side note: their shrimp and grits is THE BOMB. My mom ordered it and was kind enough to let me try it. Just. WHOA. Get the shrimp and grits and also get a biscuit, because you can’t not get a biscuit at Biscuit Love. And one more thing – get the bonuts. See that little nugget of heaven right there? That’s a bonut. 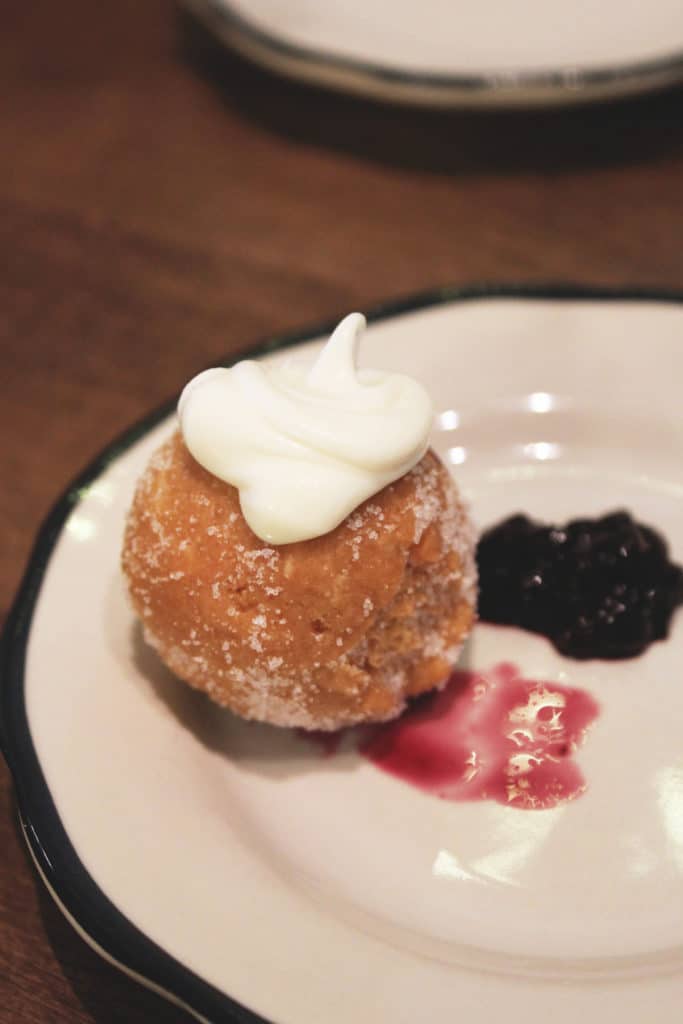 I Dream of Weenie –

In East Nashville, the Brooklyn-ish part of the city, there is a hot dog stand in an old VW bus. Do you get any more hipster? They have daily specials with unique toppings along with familiar standbys like mustard and sauerkraut. I wasn’t hungry at this point, but hot dogs are really more like a snack than a meal, so I somehow found room for one. 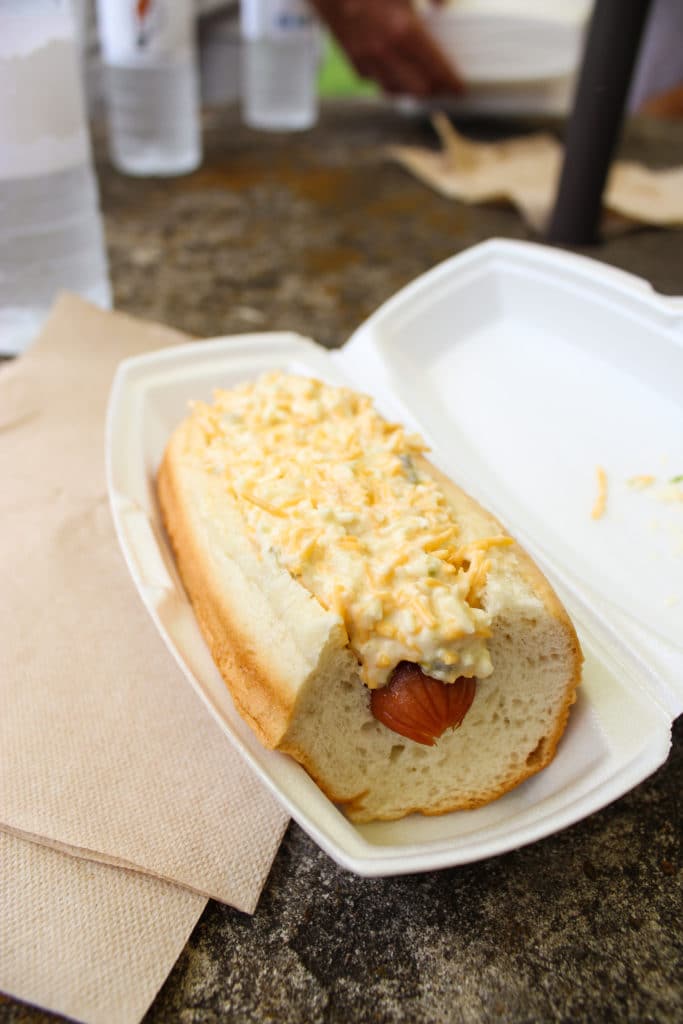 Just a few blocks from I Dream of Weenie, we came across The Local Taco. It’s off the beaten path and tucked into the backside of a block of stores and boutiques. What lured us in was their happy hour margarita special because, margaritas. And the margarita was so good that Clark ordered a taco… and we came back later for more tacos and margaritas.

When the weather is nice, they have a roomy, breezy covered patio space. Date night, anyone? 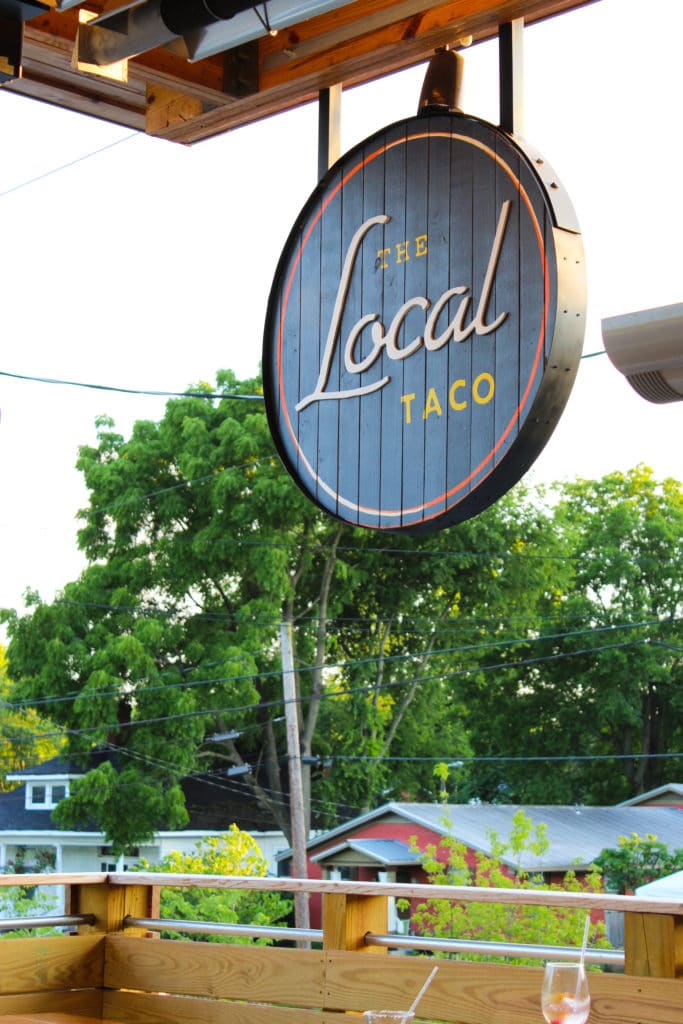 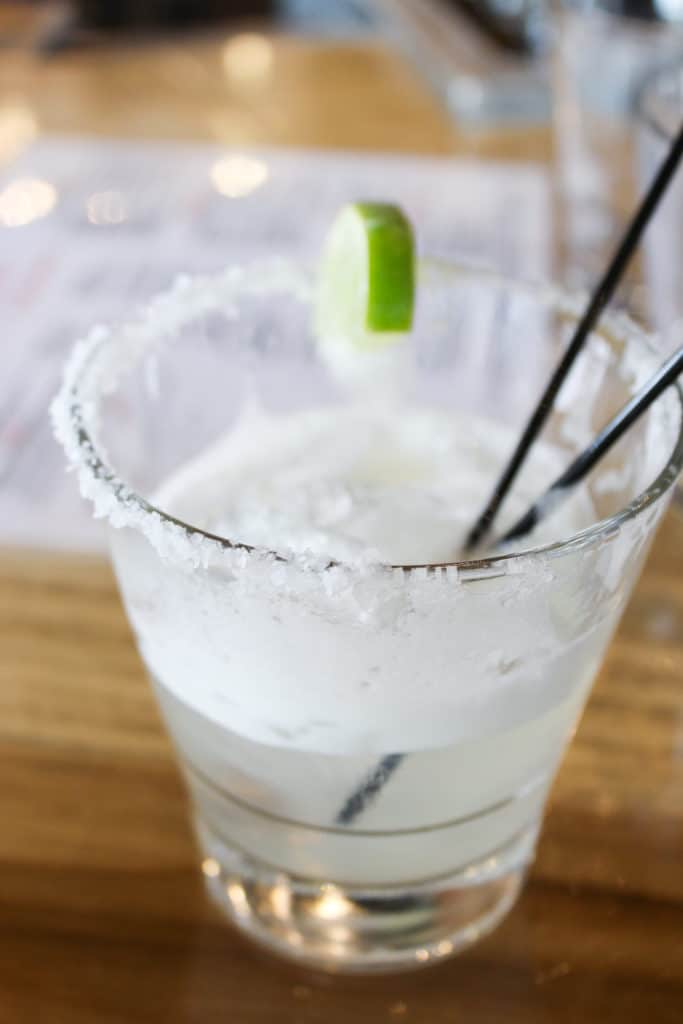 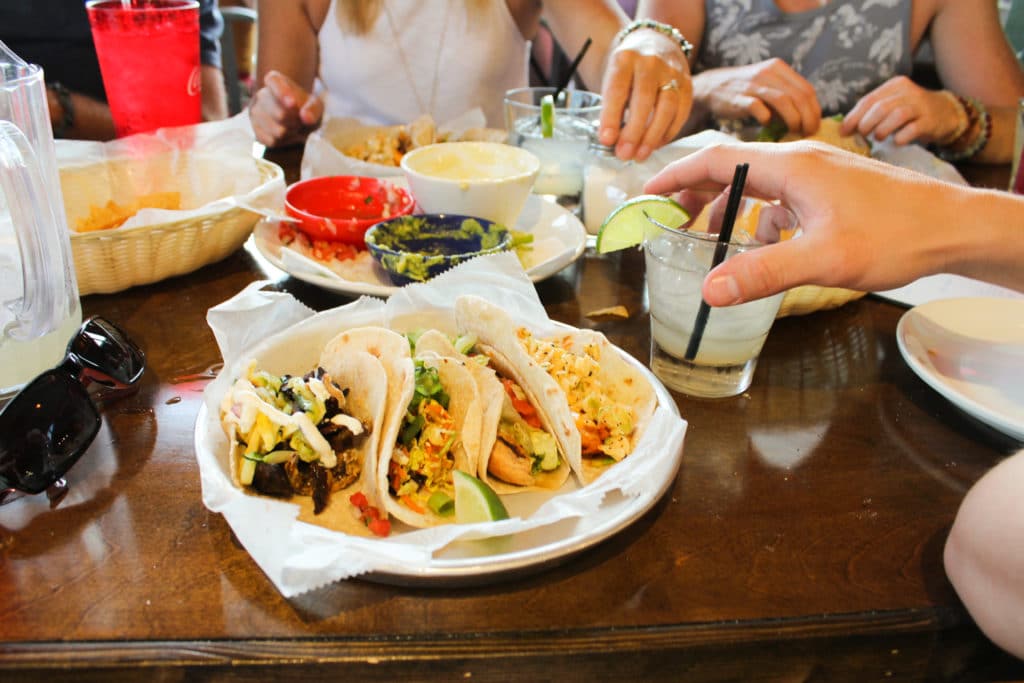 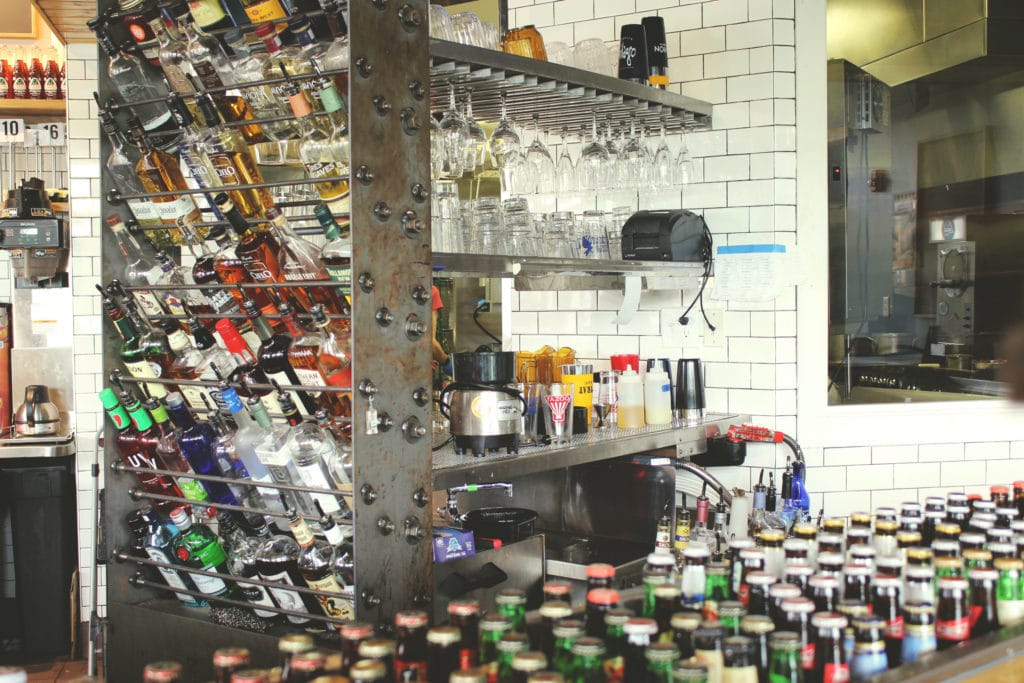 Another East Nashville gem, this pizzeria is more New York than Nashville. They sling the homemade dough, use an original sauce recipe, and bake the pies to a perfect, crispy crunch. I’m really picky when it comes to pizza, but Five Points passed all of my tests with flying colors. 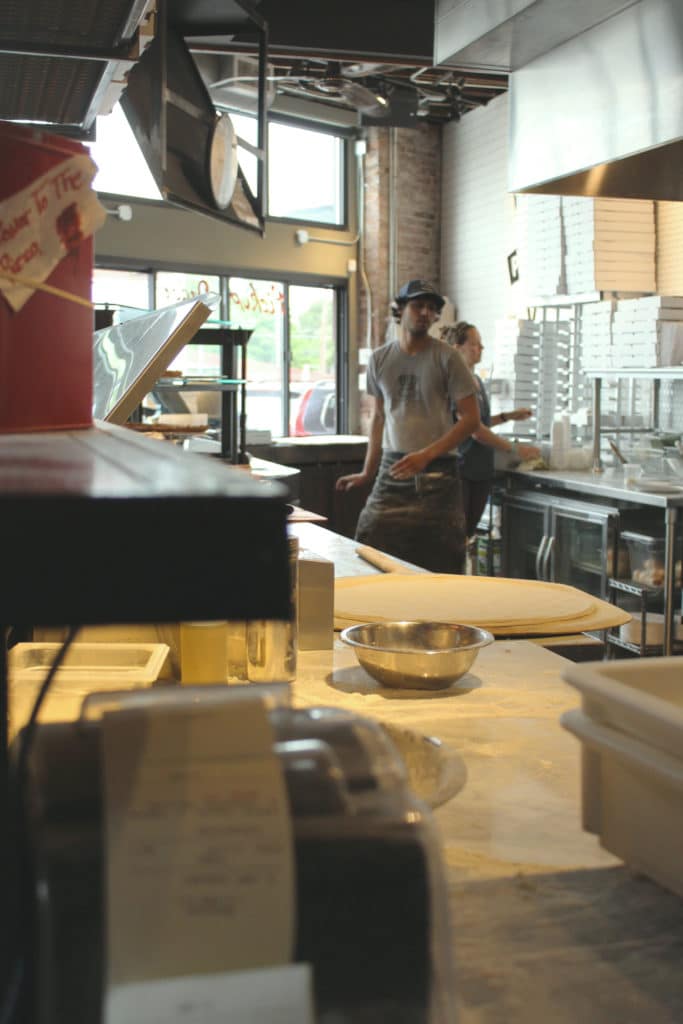 Nashville’s first (and best) brewery is a gem. By no means am I a beer person, but I was while in Nashville because you can find Yazoo beer almost anywhere and it is damn good. One of our high school friends works at Yazoo so we got treated to a special tour and tasting.

While I like almost every beer that they brew, I’m especially a fan of their sour beers. Whether you like beer or not, Yazoo is worth visiting. 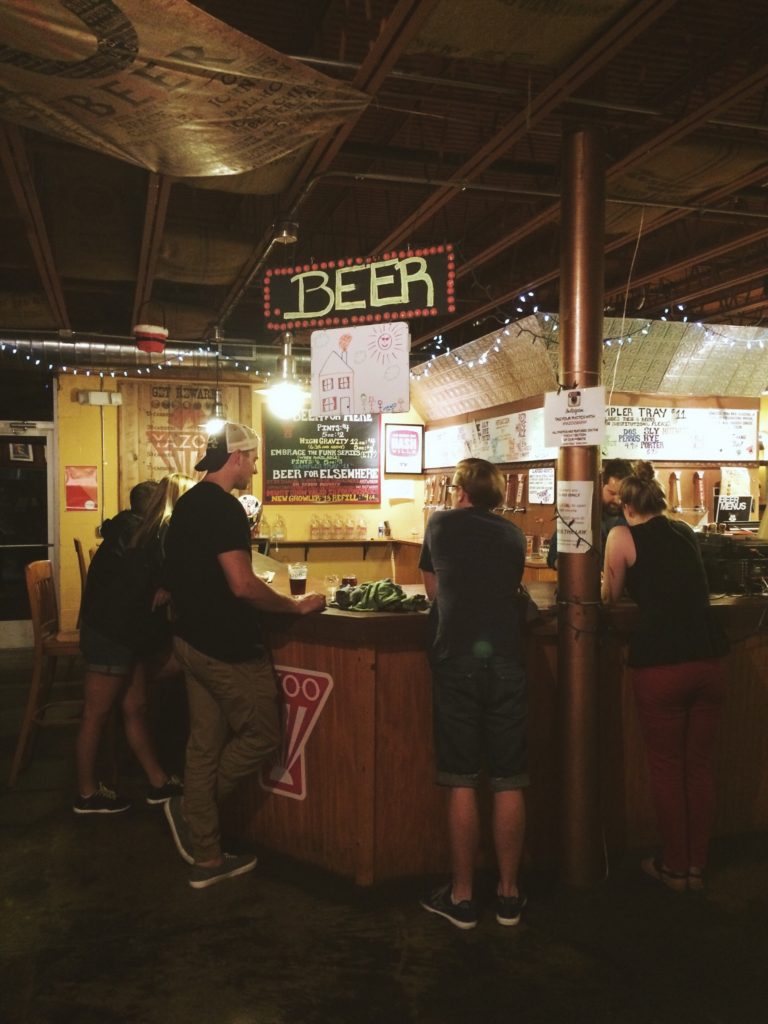 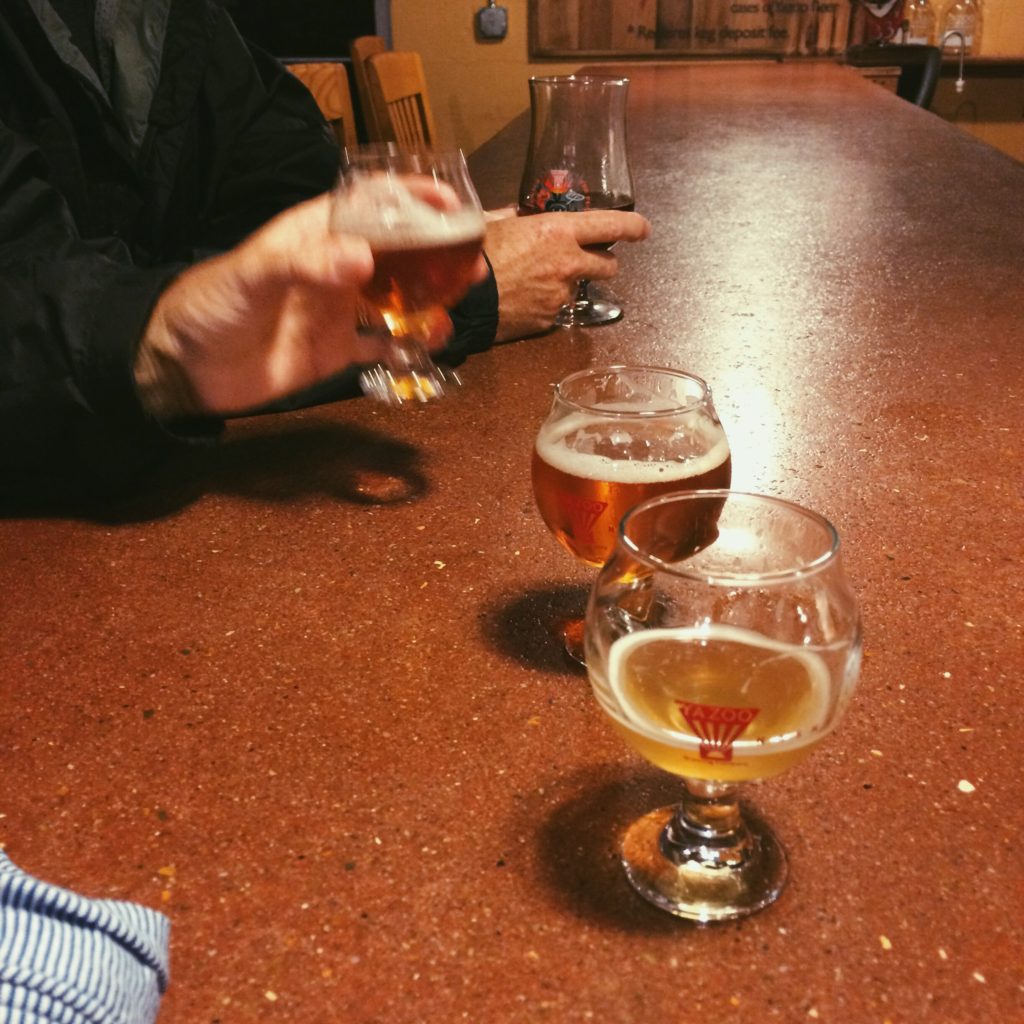 It sounds like the name of a store that might sell rasta souvenirs and Bob Marley records, but it’s actually a hidden gem of a restaurant that’s tucked away in the indoor section of Nashville’s Farmer’s Market. They serve up authentic Jamaican food – jerk, plantains, rice and beans, greens, patties, and more. The staff is beyond friendly and they are more than happy to answer any questions you may have. The food was so, so good I can’t even describe it. Comfort, spice, and realness. 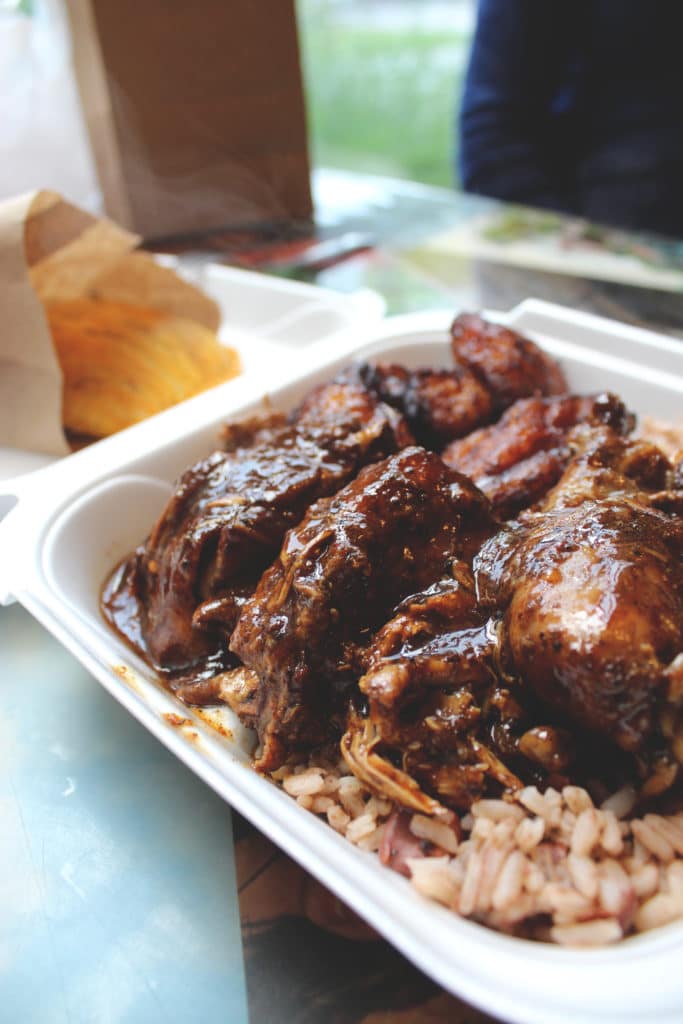 Go for brunch. Get a crepe. This place has the breakfast game on lock, so again, expect to wait if you go at certain times. Also, they make fantastic cocktails and the best sangria I’ve ever had – so most definitely get a drink. 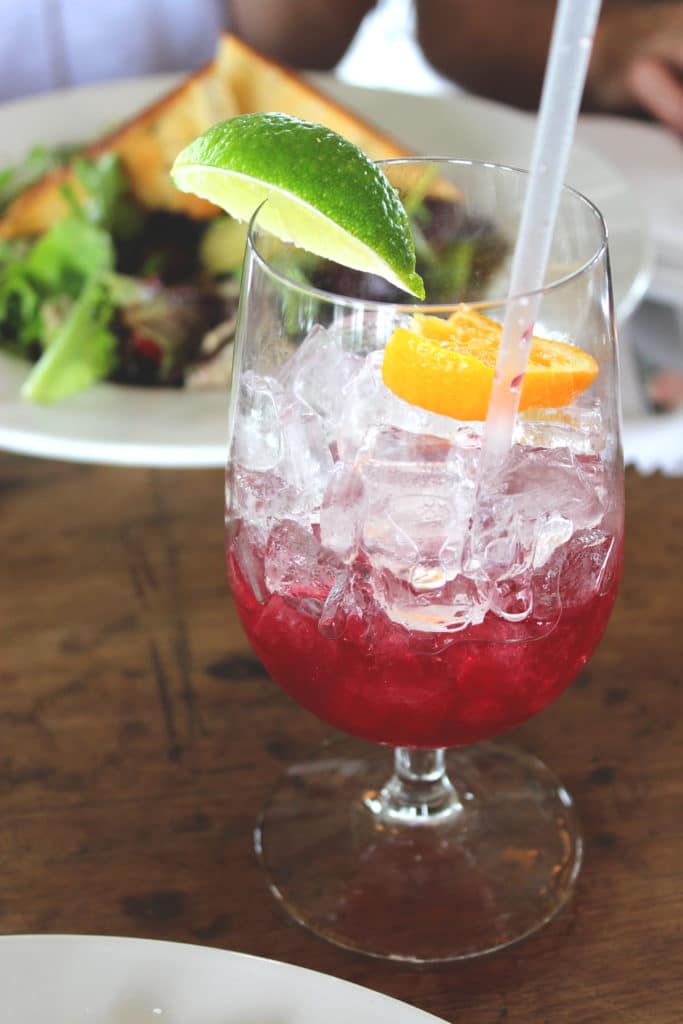 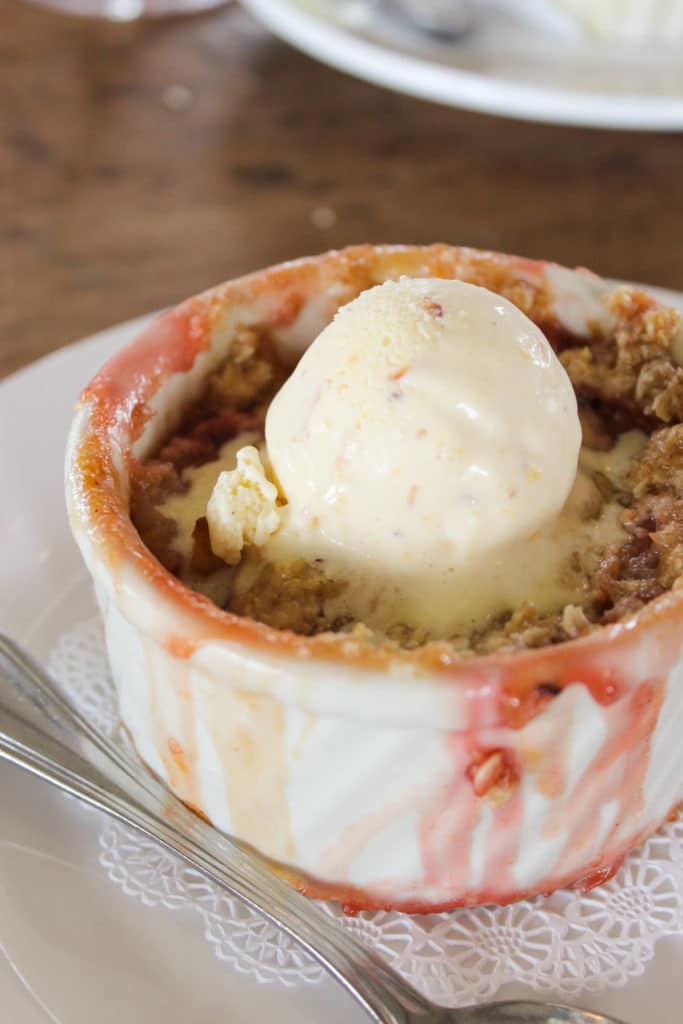 I mentioned earlier that food is what brought us to Nashville, but more specifically, it was Husk. After binge-watching Mind of a Chef on Netflix, Clark and I developed a chef-crush on Husk’s creator, Sean Brock. The Nashville location is an ode to “land” whereas his Charlotte installment focuses on “sea.” He’s a southern boy whose focus is preserving, exploring, and sharing the south’s food heritage. As such, he works closely with local farmers and gardeners to source ingredients for the dishes at Husk. And he is also involved with preserving heirloom varieties of grains, vegetables, and plants that are native to the south to prevent them from disappearing.

I don’t have any photos of our meal at Husk because 1) the lighting was very low and 2) I didn’t feel like lugging my camera in and being that person in the restaurant. BUT – everything we ordered was fantastic. The star of the appetizer round was the ever-changing vegetable entree, believe it or not. It’s a great size for sharing. Clark had chicken breast, to which I would normally say “blah,” but it was creative, tender, and savory. I don’t usually spring for dessert, but it’s not every day that you get to eat at Husk. My white chocolate parfait was the highlight of the meal – not too heavy, the perfect portion, and super inventive – not just your average chocolate cake or creme brûlée. Bottom line, go to Husk.

Hot chicken is a Nashville signature. More or less, it’s fried chicken that is tossed in hot sauce. Really, really hot sauce. Hattie B’s and Prince’s are the most popular hot chicken spots, but we decided to try the underdog. At 400 degrees, their options for spice are ranked by temperature – you can choose 100, 200, 400, and although it’s not on the menu, 500 and 800. 200 degrees was extremely hot for me but I suffered through most of it. I also tried Clark’s 500 degrees – madness, I tell you. According to him, it was the spiciest thing he has ever eaten. But when the cook herself tries to talk you out of your decision, you know it’s going to hurt. They make every meal to order, based on the desired “temperature,” so expect to wait 20-30 minutes for your order to come out.

If you decide to seek out hot chicken, do so at your own risk. I recommend waiting until later on in your visit. It fills you up and puts fire in your stomach, which is all fun and games until it keeps you from eating your next meal. Just… trust me on this one.

Just as a quick bonus, I have one important “to-do” recommendation. When nighttime rolls around and you’ve had all you can eat, head to Printer’s Alley near downtown Nashville. There is a blues bar called Bourbon Street Blues & Boogie Bar. You are guaranteed to see a fantastic live blues performance, up close and personal. I think it’s one of the best spots for live music in Nashville. 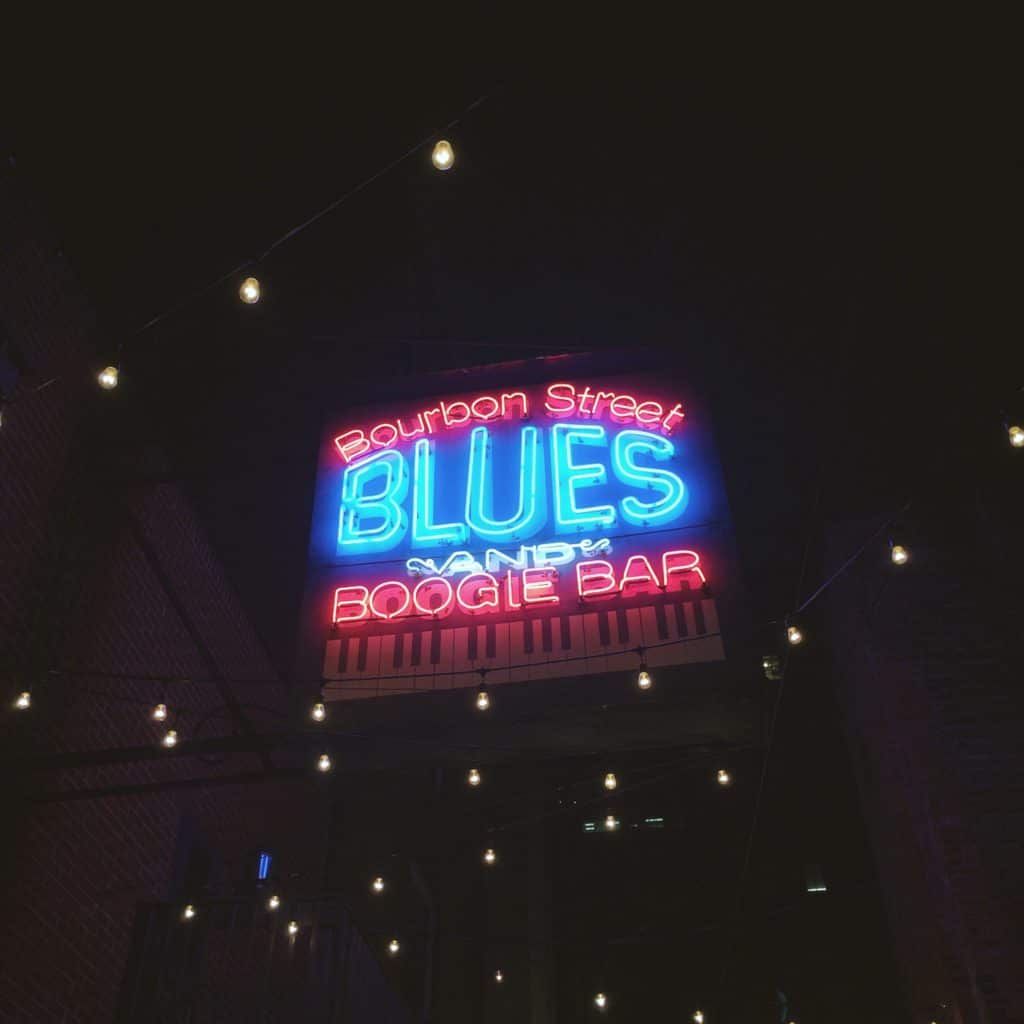 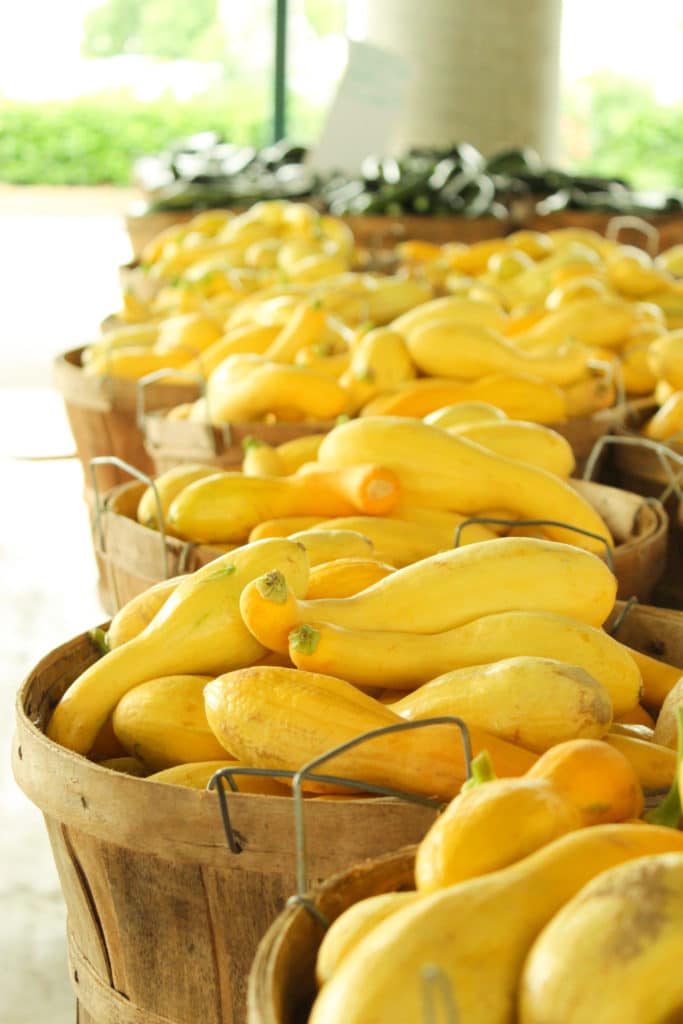 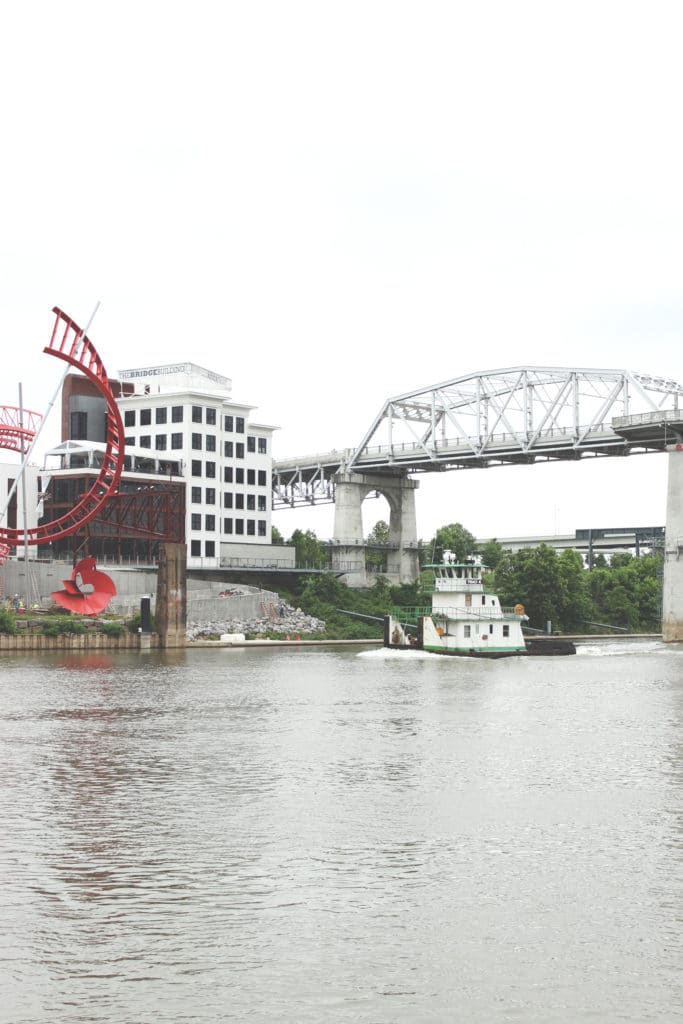